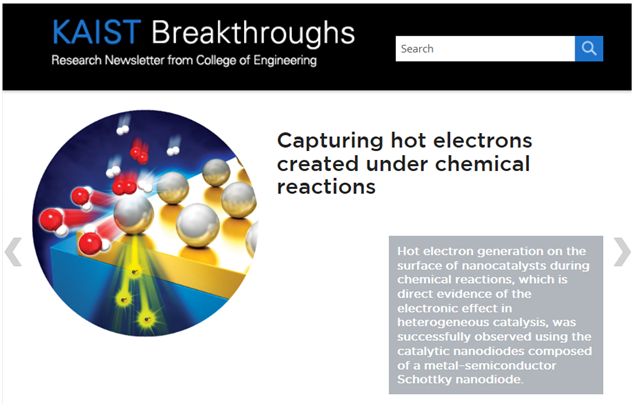 Hot electron generation on the surface of nanocatalysts during chemical reactions, which is direct evidence of the electronic effect in heterogeneous catalysis, was successfully observed using the catalytic nanodiodes composed of a metal–semiconductor Schottky nanodiode.

Catalysis is a core task for developing next-generation energy technology as well as in the traditional chemical industry because catalysts are used in more than 85% of practical chemical processes. In recent year, “nanocatalyts”, combined with nanotechnology, have been intensively studied to improve catalytic activity and selectivity. One of the key issues in heterogeneous catalysis is the role of hot electrons on metal catalysts deposited on an oxide support. In particular, with the rising development of nanocatalysts for industrial applications, there is great need for a fundamental understanding of hot electron dynamics on metal nanocatalysts. Elucidation of the electronic effect on catalytic activity requires direct detection of hot electrons on metal nanoparticles; however, this is challenging because of the quick thermalization of hot electrons via electron–electron scattering, electron–phonon coupling, and the electrical disconnection of the nanoparticles.